In 2001, the Korean Design Protection Act introduced a "partial design system" allowing registration of specific portions of larger designs reflecting creative elements, and thereby enhancing the protection of design rights in Korea by enlarging the scope of designs eligible to be protected. As one example, a home appliance company was able to obtain a partial design registration for the uniquely-shaped air outlet used on one of its air conditioners, and subsequently was able to claim infringement against a competitor's air-conditioner product with a similarly-shaped air outlet, even though the overall product was dissimilar. 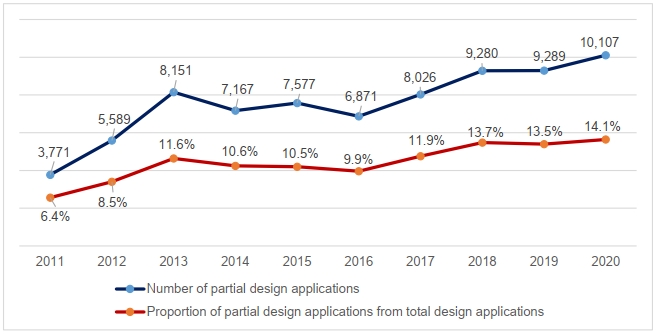 When looking at partial design applications filed last year according to product category, the application group with the largest number of filings was "electrical and communication devices," including digital electronic products such as mobile phones/wearable computers, which accounted for 3,322 out of the total of 10,107 applications (32.9%), followed by "household items" with 1,320 applications (13.1%), and "clothing and personal items" with 1,161 applications (11.5%).